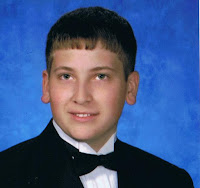 
Kevin Walters, son of Rose and Jeff Walters (PGK of St. Joseph Council No. 3814), has been awarded a Bishop John J. Dougherty Scholarship by the New Jersey State Council of the Knights of Columbus. Four $1000 scholarships are presented each year by the NJ K of C. The scholarships are offered to children, siblings or grandchildren of members of the Knights of Columbus. Kevin recently graduated from St. Joseph Regional High School where he was the class Salutatorian. His other awards and honors included being a St. Joseph Scholar, a Bloustein Scholar, a member of the National Honor Society and president of the Spanish Honor Society. Kevin earned varsity letters in bowling and tennis. He was a Eucharistic Minister and a member of the campus ministry. He also completed his Eagle Scout project - a shrine to Our Lady of Fatima - and expects to earn the rank of Eagle Scout. Kevin will be attending Columbia University in New York City to study engineering.
Posted by K of C St. Joseph Council 3814 at 11:44 PM